My Love Affair with the FH 50 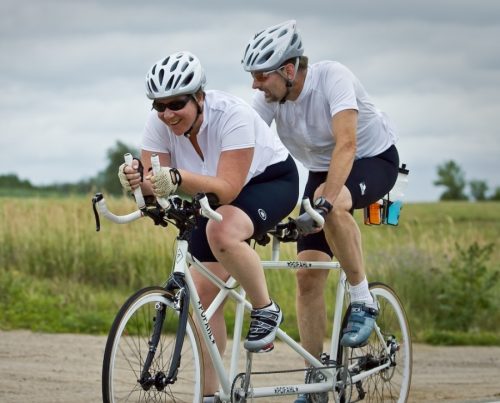 My “love affair” with the Firehouse 50 began back in the late 1980’s and early 1990’S when as a newcomer to bicycle racing in my mid 20’s.  I heard about a race in northern Wisconsin that “you just have to ride”.   So a group of my then cycling biddies and I loaded up their Chevy Suburban with our race bike, gear, tent and enough food to feed an army and headed to the small town of Grand View.

It was obvious when we first arrived that this event was DIFFERENT from the local races we were used to.  From the professionally run registration, to the well stuffed swag bag and a killer T-shirt, this event built pre-race excitement like no other.  At the Friday evening Spaghetti Dinner and the Saturday morning Pancake Breakfast discussions of proper pre-race nutrition and race strategies abounded.

As for the race itself, it was hard to explain the feeling of sweaty palms, sound of cleats clicking into pedals, gears being shifted and lots and lots of heavy breathing as the surge of cyclist slugged their way to the top of the divide.  After the first grueling five miles, the course becomes a scenic high speed roller coaster-like tour of some of the most beautiful territory in the Midwest.

When finally coming into Grand View and making the SHARP left hand “church corner” turn you were treated like a professional cyclist having your name announced by the always charismatic announcer and receiving loud cheers from the large crowd and much needed assistance from the “pro- tour like” volunteers.  After the race, there was the always ample fuel replacement available and a great awards ceremony made possible by the hard work of the behind the scenes volunteers to get the finishing times and places organized.

Back in the 80’s and 90’s I rode hard (never in the lead group or for a podium position) because I was in great shape and loved to compete.  There was always a group of other cyclists with whom I could battle in my own “race”–complete with setting each other up for the final sprint.  Like many “love affairs” of mine, my ability to participate in the Firehouse 50 ended when a change in job location and commitment to raising a family took me far from my beloved race.  Now, some 25 years later I have returned to the pine forest of northern Wisconsin with my wife, Anne, to share my love of competition and to a race like no other.

Much has changed in my life, most notably the loss of most of my functional vision because of an inherited retinal eye disease—as well as a few grey hairs.  As the stoker on the back of a tandem, captained by my more than capable wife, one might think that participating in this race may have lost some of its excitement.  Nothing could be further from the truth!  Yes, it’s true that the once beautiful scenery is now but a blur to me and the ability to stare my competitors in the eyes is no longer a tactic of which I am privileged…the race hasn’t changed.

Though the numbers singing the national anthem are somewhat smaller, the stomach butterflies and sweaty palm are the same.  The effort needed, the challenge of the course, the professionalism of the volunteers, along with the enthusiasm of the crowds and hearing my name announced as I cross the line are still here.  Thank you Tom for rekindling a “love affair” with a place that is VERY special to me.

p.s. Anne loves the race too.
p.p.s.  I think Farley (my Leader Dog) had a good time also. 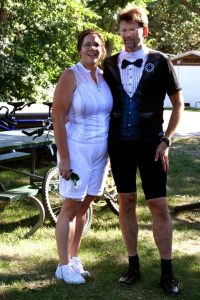 I was fortunate to have met Mike Brown, a visually impaired cyclist, after he completed our event this past August.  I asked if he would write an article about his experience and graciously agreed. — Tom Martin, Grand View 50 Events Director